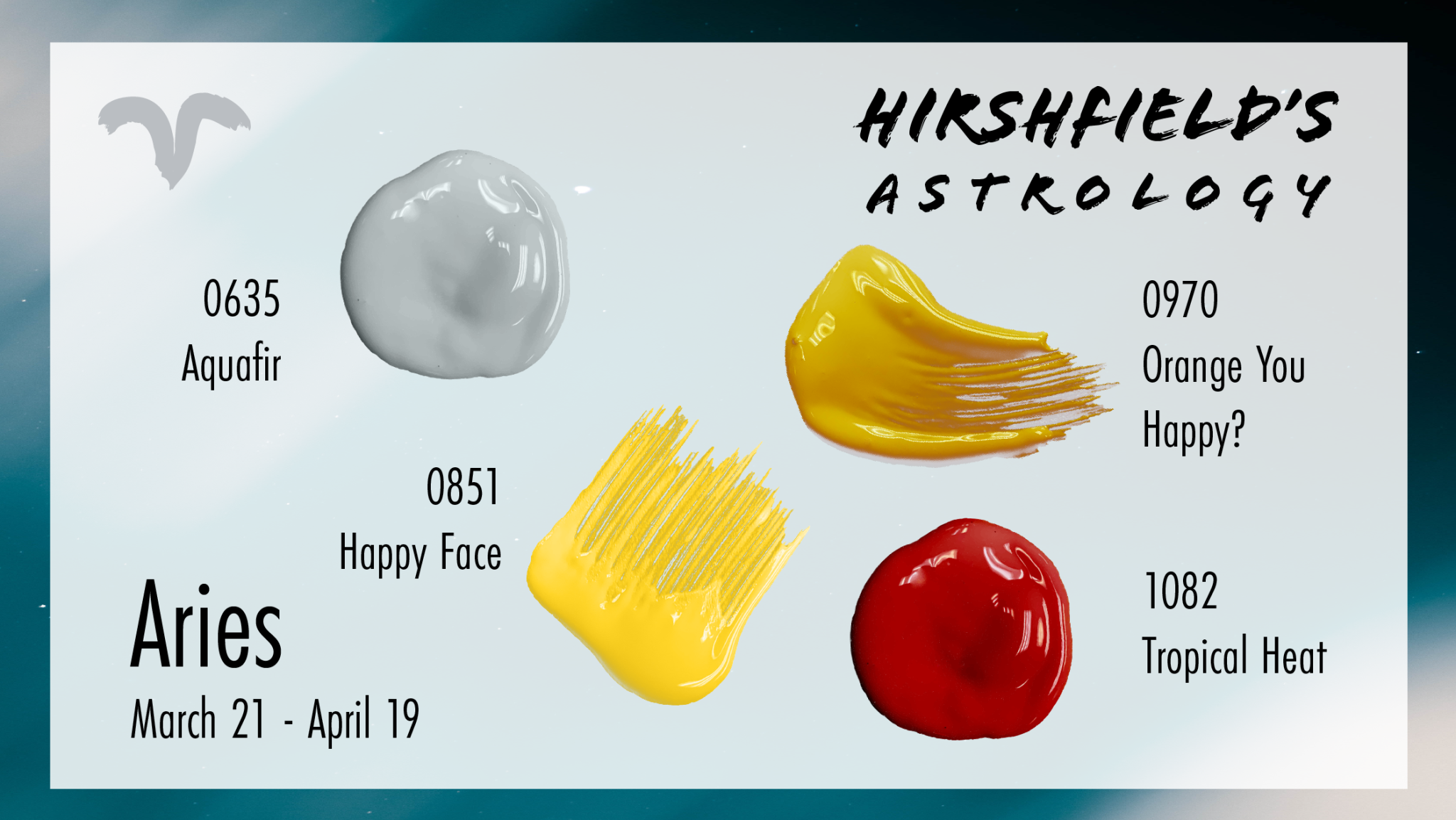 Want to know which Hirshfield’s colors represent your personality? Using your birthdate, astrological signs give you the chance to know more about yourself (according to the stars) and others around you. Hirshfield’s has been inspired by the power of Astrology and Zodiac signs, to bring you specially curated Hirshfield’s colors to compliment your style and project. 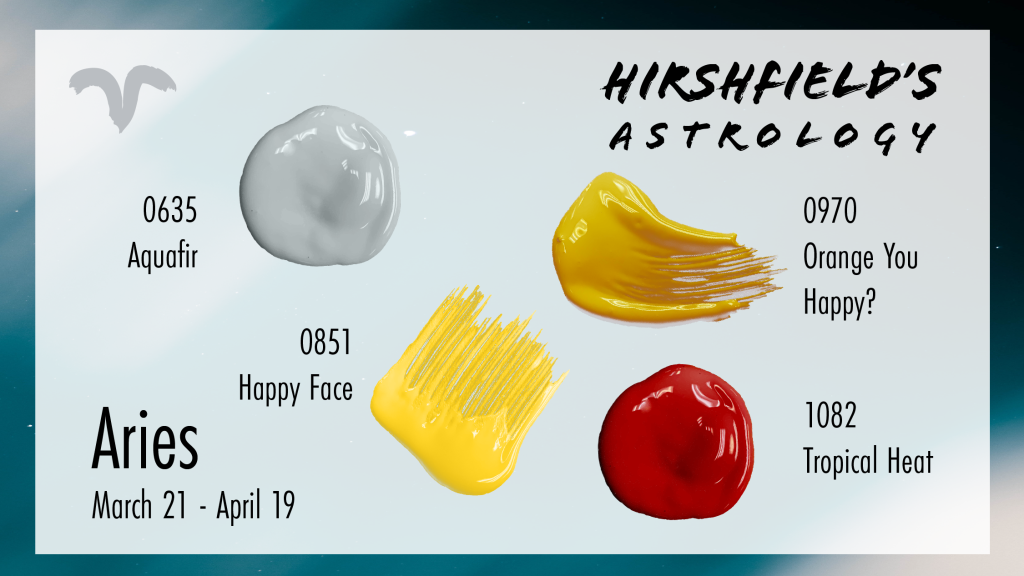 We kick off the Zodiac year with a sign that has a great sense of ADVENTURE and loves to explore the world around them, Aries. Born between March 21th and April 19th, this Fire sign inspires others, bringing INDEPENDENCE and creativity to the table. Taking into consideration their PASSION and DRIVE, we introduce the color palette for Aries: 0635 Aquair, 0970 Orange You Happy?, 0851 Happy Face and 1082 Tropical Heat. 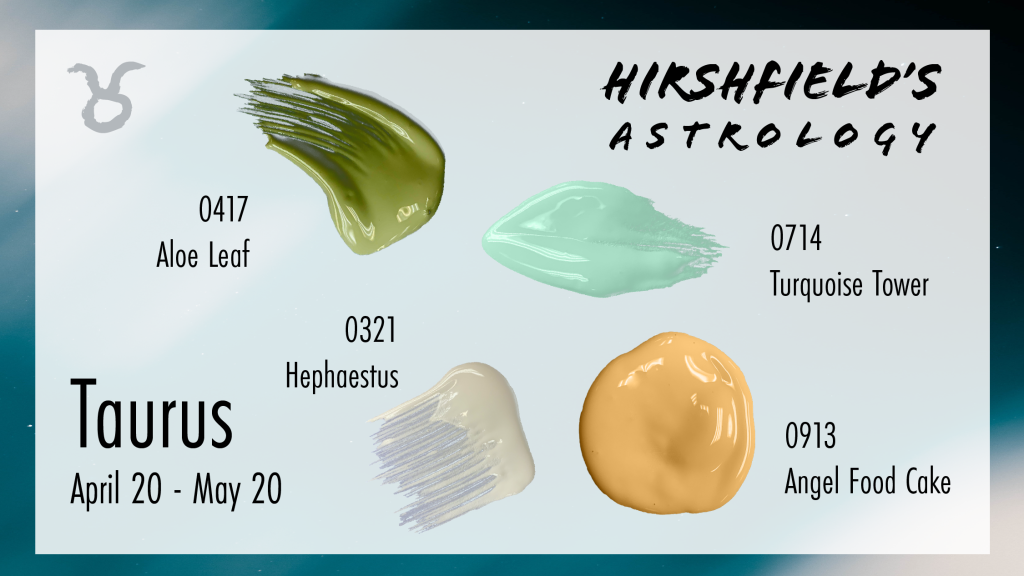 Craving STABILITY and beauty, those born from April 20th to May 20th represent the HARD-WORKING Taurus. Taurus, illustrated by the bull, are GROUNDED and CONNECTED with the beauty of the natural world. Selecting colors inspired by the world around us, we introduce the Taurus palette: 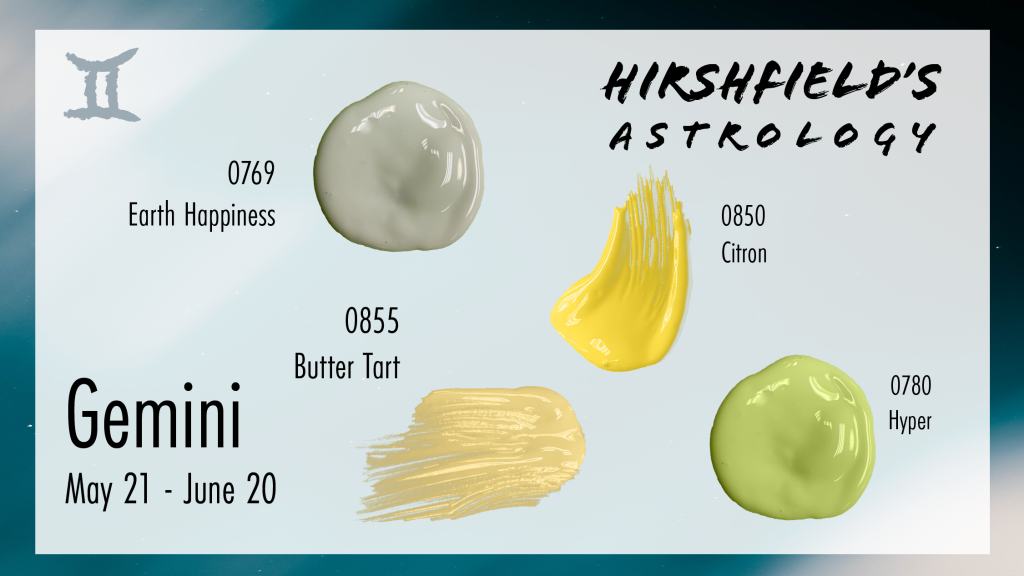 The first air sign values COMMUNICATION and the ability to connect with others, illustrated by the twins. Born between May 21st and June 20th, Gemini are known to be CURIOUS, knowledgeable, and WELL-SPOKEN. The Gemini palette is VERSATILE, each color able to work with the next: 0769 Earth Happiness, 0850 Citron, 0780 Hyper and 0855 Butter Tart. 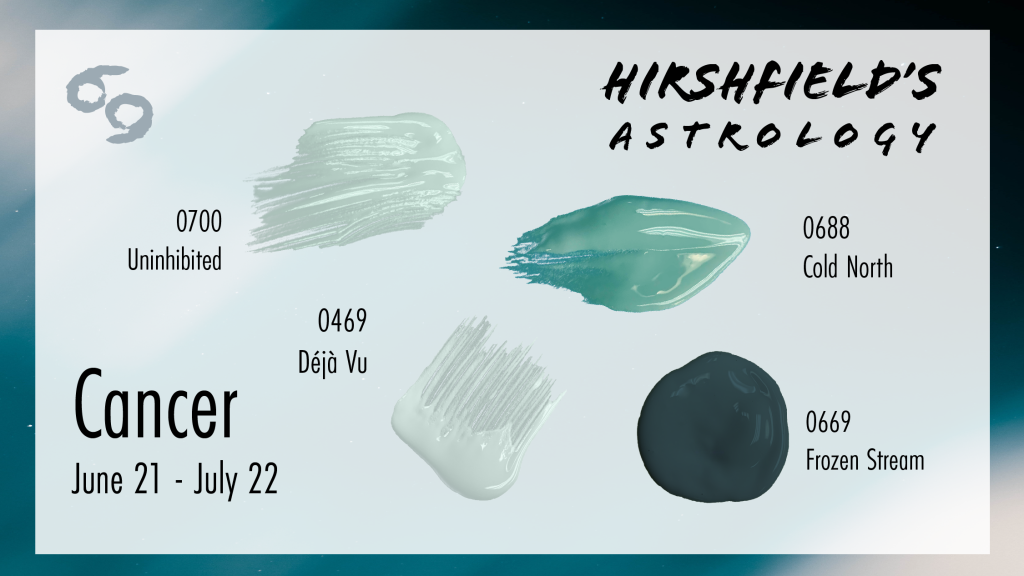 Cancer season runs from June 21st to July 22, bringing a REFRESHING focus on our home ROOTS. Illustrated by the crab, Cancers are highly in touch with their EMOTIONS, allowing them to be in tune with environments surrounding them. As a Water sign, we chose SOOTHING colors that celebrate the Cancer season: 0669 Frozen Stream, 0700 Uninhibited, 0688 Cold North and 0469 Déjà vu. 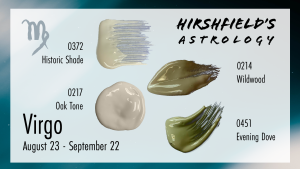 The details matter with Virgos, and they make a DIFFERENCE. ORGANIZED and practical, Virgos know what they want. Born between August 23rd and September 22nd, this Earth sign is caring and GROUNDED. Introducing colors of STABILITY: Oak Tone, Evening Dove, Historic Shade and Wildwood. 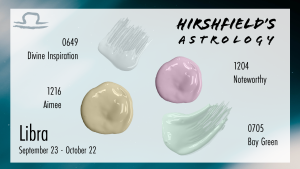 It’s all about BALANCE. Represented by the scales of justice, Libras (born September 23rd to October 22nd) fixate on EQUITY and balance in every aspect of life. COMPASSIONATE and detail-oriented, Hirshfield’s colors Divine Inspiration, Noteworthy, Aimee and Bay Creek offer the HARMONIOUS energy Libras strive for. 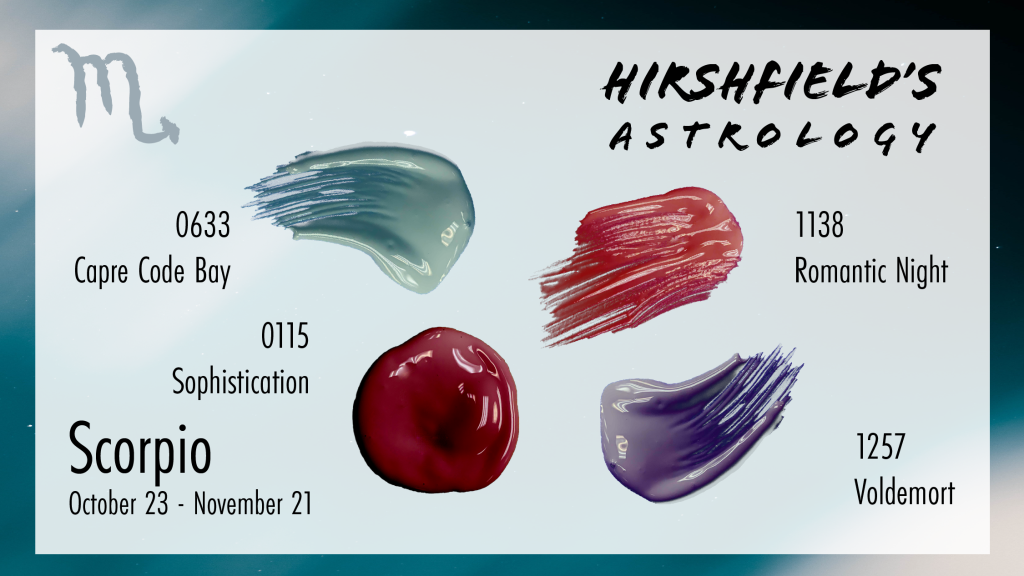 Scorpios are known for their MYSTICAL nature, a unique stand out from the other signs. Great LEADERS born between October 23rd and November 21st, Scorpios are DEDICATED to their craft. They are FEARLESS, facing every challenge with the mindset to conquer. Scorpios, like their companion Water Signs, are in touch with their emotions and environments around them. Capturing their inner passions, the Scorpio palette gives an in-depth look at a mysterious sign: Cape Cod Bay, Romantic Night, Sophistication, and Voldemort.

Follow us on social media to be the first to see each Hirshfield’s Astrology palette as they come out!