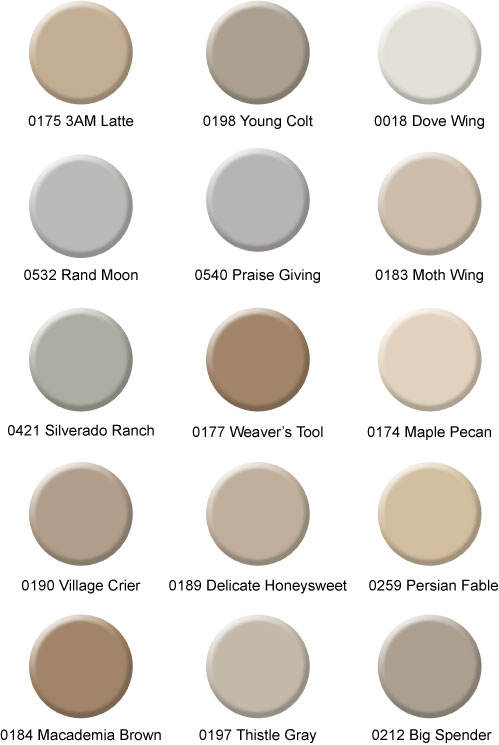 Hirshfield’s customers are still loving their neutrals. Not an Emerald Green in the bunch AND seven paint colors from 2010 are best-sellers in 2014. Still the mid-tone neutrals but going pastel. With the popularity of gray, our customers are gravitating towards warm and cozy grays that lean towards the browns.

These Hirshfield’s neutrals are great colors for bridging warm and cool tones in a room. They can go in different directions depending on the other colors in the room; chameleon colors that take on the properties of the colors around it…is it gray or green? Customers like these “safe” colors. They’re familiar, inviting, and play nicely with existing pieces. A neutral palette makes a great backdrop for layering textures and colors, and when it’s time to freshen up your space with different accent colors, having a neutral background makes it so much easier.

What does the future hold for neutrals? Trends forecaster Michelle Lamb shares her insights from the Maison & Objet trade fairs held in September 2013 and January 2014:

Cool, clean mid-tones have been the workhorse of the gray story. This time, they lost ground in a big way. All but banished from the high-end, their most-obvious presence was in less-expensive, mainstream products. Even then, cool gray looked dated.

Meanwhile, the gray version of taupe warmed yet again, moving a step closer to brown. This shift, along with the advance of browns, confirmed that the tables have turned on neutrals popularity. Expect browns, not grays, to be the fashion leaders into 2015. – Trend Curve October 2013

Browns also conveyed an earthy message as they established themselves as the go-to neutral. saturated beige and paper-bag browns were seen more often than chocolate. However, chocolate was building, too. In some upholstery stands, there was a sense of looking over a sea of browns. All those browns made declining grays look even more dated. – Trend Curve February 2014

Time to repaint? This list of best-sellers is a great place to begin your neutral journey. Remember these are computer generated colors. Don’t judge. Stop by one of our retail stores and see for yourself why Hirshfield’s customers are loving their neutrals.